A very frightening health crisis with my paralyzed dog, Isabel happened in the past month. I wanted to share with you so maybe you don’t have to go through this with your dog. 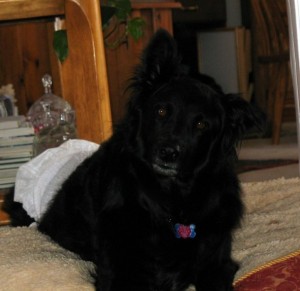 Isabel became acutely ill. The usual dog symptoms of a paralyzed dog and urinary tract infection did not seem to be occurring and she has never been sick with any other symptoms so we were at a loss. We watched her closely for about a week and she just didn’t get any better, The main thing we noticed at this time was lack of interest in her walk. She was still eating and drinking in fact she was drinking a lot, but not enough to worry us. Then she began having diarrhea, of course this is a huge concern because she for sure will get an UTI. A dog in diapers can not tolerate having diarrhea without infecting themselves. So I did my best to keep her clean and gave her Immodium to stop the diarrhea.

Next she developed vomiting several times. Nothing was in the vomit like undigested food or anything, but she stopped eating. She would still drink and a lot, more than usual, The thing to worry about with a dog with excessive thirst and urinating a lot is diabetes. So we were worried but still watching.

We decided she was having too many dog treats. Maybe her partially paralyzed bowel and being ten years old, was just causing her not to be able to cope with the harsh jerky treats. She wouldn’t eat her chow but she still wanted her treats. We gave her the Costco Kingdom Pets Chicken Jerky Treats, in fact she has eaten them for years, long before her paralysis, so we thought nothing of it, in fact we were glad she would eat anything. Well then I saw in her vomit a bit of the jerky undigested and that was that. We stopped the jerky, She could only have her lamb and rice cookie treats from then on.

Well lo and behold she started to improve after a couple of days. No further diarrhea or vomiting and she slowed down on her water and she nibbled her regular chow at last.

Well coincidentally, one of her favorite treats was the Costco Kingdom Pets sweet potato and chicken jerky wrap treats. I thought the sweet potato would be much more gentle to her stomach and bowel. Our Costco stopped carrying it and so I went online to see if I could find them since we decided the other jerky treat was too harsh for her ten-year old paralyzed bowel to handle.

Wow, what a surprise I found! Do a search on Google for Kingdom Pets Chicken jerky dog treats. You are going to find post after post of concerned pet owners that have fed their pets these treats and they have sick dogs and some have dead dogs. It was shocking to us. I couldn’t believe it. I was killing my beloved pet by giving her tainted chicken from China. Are you kidding me? Who can you trust?

My Isabel had every dog symptom listed on the websites, many many websites. Diarrhea, vomiting, excessive thirst, increased urination, lack of appetite, and lethargy. The next step for her would have been kidney failure and then death. 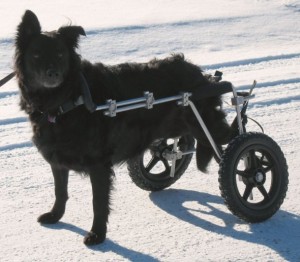 I actually believe her dog paralysis is what saved her because I blamed her partially paralyzed bowel on not being able to handle the treats. Not the treats causing the problem.

Here is an excerpt of the ABC’s report on this subject:

The U.S. Food and Drug Administration issued a warning about chicken jerky for dogs, saying some products imported from China may be associated with 70 reports of dogs who became ill or died.  That number is up from 54 reports last year, the agency indicated.

I am happy to say she is healthy and completely back to normal. We caught it in time and for whatever reason paralysis or dumb luck the events of this story are having a happy ending. I do hope any of you reading this will save your dogs too.

Needless to say we went on an all out search for dog treats made in the USA. At first not such an easy task, but we did find a couple that Isabel likes. One is Steak House Treat Company’s Lamb Cuts, treats for dogs, carried by Costco. The other is

Yummy Chummies, Wild Alaska Salman, Soft N Chewy that Costco also sells. Also cookies made with chicken, steak, peanut butter and lamb, lots of choices. She seems to like them all. She will never eat anything from China ever again. Neither will we!